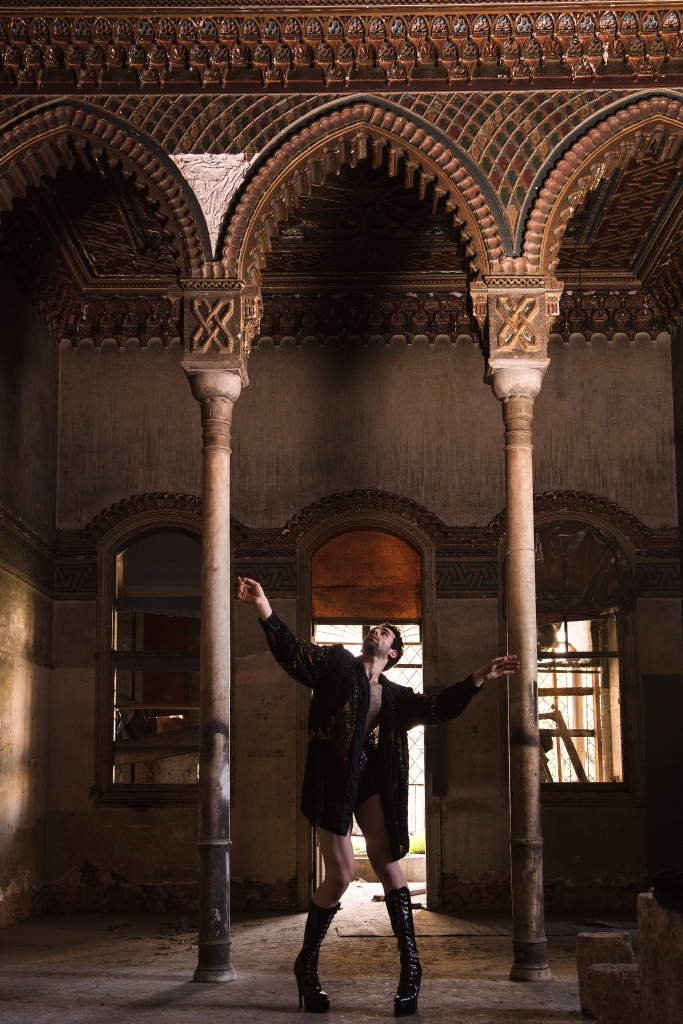 In 2014, Khansa—real name Moe Khansa—took the stage at a TED event at the Lebanese American University. He asked the audience to write down the first thing that came to their mind when they thought about belly dancing. One by one he held up the pieces of paper, which had words like ‘sexy,’ ‘woman,’ ‘seduction,’ or ‘gay,’ scrawled in red marker.

The lights dimmed and the music commenced and yet more paper fluttered onto the stage like impenetrable snow, and Khansa began to dance, the entirety of his body conversing exceptionally with every curvature of the music’s vast landscape. The audience saw something familiar and unfamiliar; it was traditional belly dance, but it was being performed by a man.

“Belly dance was the first movement method my body was introduced to,” says Khansa, “my mother used to be the queen of the dance floor and everybody took their seats to watch her dance and appreciate her grace. I watched. I learned. And now it’s a major language I’m trying to use contextually within my work.”

Three years since that TED performance, the dancer, singer, and artist has released his first music video, a kind of introduction to his world. Khayef is an adaptation of famous Egyptian artist and composer Mohammad Abdul Wahab’s song ‘Khayef Akoul Eli fi Qalbi’ (made in collaboration with Mohamad Zahzah) Khayef tells the personal story of a boy belly dancing in front of his family, focusing on themes of identity and the celebration of diversity.

Yet long-before Khansa ever took to the stage- it was actually during his university years that his vocal teacher Leila Dabaghi helped him find his focus. “My teacher taught me that dance and music are compatible,” he says, “the understanding of the sensorial relationship between the moving body and the sound and rhythm, took my basic notion about music composition to a different level beyond theory and practice.”

But beyond the physical realm, dance and music is about creating dreams for Khansa. Dreams that the spectator can enter as they connect with the performance and inevitably feel something, whether it’s good or bad. “When I perform I tend to design my own universe and gladly invite the audience to be part of it,” he says, “I’ve always wanted to share dreams where people enjoy the auditory experience, laugh, tear up, visit a trance, or simply like what they observe.”

Whatever it is you end up feeling or dreaming when watching Khansa, his impact is as undeniably bold as it is sincere. “I don’t know what the future awaits but I know that I won’t stop living my fantasies and sharing them and saying what I have to say,” he says, “but for the time being, there are so many things we need to talk about in the Arab world, and once we are done with that, and once we cross this threshold, we can probably take some time off to whirl and find a new dimension, following the footsteps of our greatest inspirations.